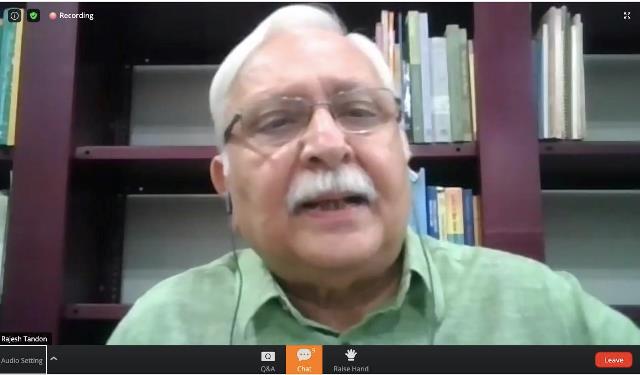 The present webinar titled City Planning- As if People Matter explored ways to democratise city planning through citizen participation. Dr. Rajesh Tandon, (Founder-President, PRIA & Co-chair, UNESCO Chair in Community-Based Research & Social Responsibility in Higher Education) spoke of existing inequalities in urban centres, where urban informals live in “rat-holes”, robbed of all dignity and respect for their labour. 90% of India’s workforce is informal and a huge proportion is left unregistered on official records. The Government does not have any fixed record of the number of the migrant workers, nor is there a count of how many went back home during the lockdown. A dichotomy lies amongst the middle- class elites in cities who on one hand, cannot afford to live without these informals who provide them with cheap labour, and yet there is a resentment and hostility that exists against the same informals. When these informal migrants left the cities during the lockdown due to lack of jobs, cities were bereft of their critical services, from vegetable sellers to domestic workers, which had been facilitated by the informal migrant workers.

Those who plan cities; the city planners, policy makers and government officials in urban local bodies plan them according to the needs of those who can afford to live in certified middle class homes and who work in designated offices, study in schools and work in cinema halls and malls. Cities are not planned to take account of the millions of workers who are the heart and soul of the same cities, but cannot afford to pay for such expensive housing as they live hand to mouth for most parts of the year. City planners do not wish to involve citizens in policy development because that involves sharing power. They do not wish to share power because the undue rewards they receive in controlling planning is too tempting for them to give up.