Under the aegis of the fifth annual Action Research Network of the Americas (ARNA) Conference 2017, the First Global Assembly for Knowledge Democracy was held on June 16, 2017, in Cartagena, Colombia.  The assembly witnessed participation from academics from around the world, including Professor Boaventura de Sousa Santos, Prof Normando Suares, Dr Mariela Garcia, Dr Mourik Bueno de Mesquita, and Prof Felix Cadena, the great popular Mexican educator, and our co-chairs, among many others.

"I am sad today. This is not the first global assembly of knowledge democracy. No representation of majority of people" ~ Prof Boaventura de Sousa Santos
The Assembly began with introductions from our co-chairs, Dr Rajesh Tandon & Dr Budd Hall. Dr Tandon touched on the various aspects of knowledge democracy, and said that ‘it was not a spectator sport, but involved diversity and respect’. He paid his respects to his unschooled, yet knowledgeable grandmother and also to the millions of domestic workers across the world, on what also happened to be the International day of domestic workers’. He said that knowledge democracy focus went beyond cognitive justice; included multiple modes of enquiry and epistemic justice as well. Dr Hall, pointed towards the epistemicide in various countries across the world, and religious discrimination taking place in higher education. He spoke about the richness of indigenous knowledge, as he reflected on his recent visit to Uganda.

Further, Prof Boaventura de Sousa Santos pointed out towards the irony of holding the global assembly without adequate representation from the people. He said that,’we should fight for democratic peace, not neo-liberal peace. For this, it was important to talk about and recognize other forms of colonialism’. He also asked whether Participatory Action Research (PAR) can represent the chasm between those who ‘know’ and those whose knowledge is excluded? He mentioned that today, our universities need popular education & advocated the creation of a popular university of social movements’. 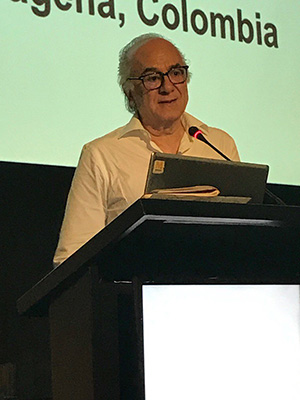 This was followed by two working sessions of the global assembly, which witnessed extensive deliberations from all around the world, using the virtual platform. Finally, the conference closed with a musical performance, led by the students, and with rest of the participants joining in the party!

All in all, despite questions on representations, ARNA 2017 Conference hosted a memorable gathering, on the occasion of the 40th anniversary of the first symposium on PAR led by nine other than Prof Orlando fals Borda. The conference, by way of its deliberations and events gave a fitting tribute to the Prof Borda, the person himself, and also the legacy he has left behind. The conference closed with a spirit of solidarity towards PAR, and the participants committing to take the legacy forward with passion, and heart!

Until, we meet again, from everyone of us here in Cartagena, Colombia; Abrazos & Muchas Gracias!!