Budd Hall participated in a panel on the UNESCO publication Rethinking Education: Towards a Global Common Good as part of the European Society for Research in the Education of Adults (ESREA) held at the Irish National University in Maynooth, Ireland on September 9th.  Rethinking Education has been designed to follow the series of influential earlier UNESCO documents, Learning to Be and Learning: The Treasure Within.  This latest document designed to stimulate discussion and debate about education and the 21st Century, is “a humanist vision of education as an essential common good”.

Whose common good? The unequal distribution of knowledge

Budd’s response to the report focussed on the question of whose common good was included within this concept?  He shared the following map of the world that represents the unequal production of knowledge. 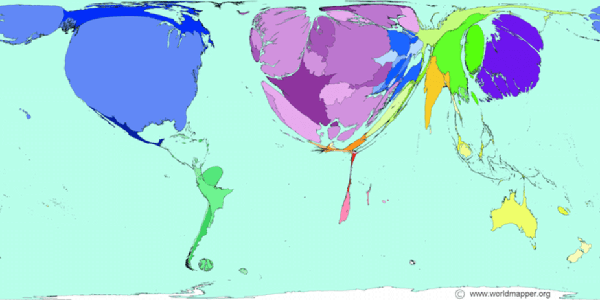 Aside form the failure to address some of the more obvious equity based issues about knowledge, the report, inspite of some very good work on schooling and adult education suffers from a very out-of-date and inadequate analysis of higher education.  The report has missed completely the emphasis coming out of the 2009 UNESCO International Conference on Higher Education which is one of social responsibility. No mention of the Communiqué of that conference nor surprisingly of the UNESCO related GUNiWorld Report on Higher Education 5 :Knowedge, Engagement and Higher Education Contributing to Social Change.  A mention of MOOCs and the concern about the misuses of global rankings are about all that the report has to contribute.

The shift from the idea of the public good to common good is a worthwhile debate, but a similar shift from knowledge society to knowledge democracy would help to draw issues of equity and action into much sharper focus.