The inaugural session saw a welcome address by Prof YSR Murthy, Registrar, JGU. The welcome address was delivered by Prof C Raj Kumar, Vice-Chancellor, JGU, where he outlined some important points. He shared that ‘Universities today are faced with both internal and external challenges. While there are increasing expectations from the society, businesses, corporate, parents with respect to the roles and responsibilities of universities; barriers in the form of excessive regulation are paramount. There is a need to be mindful of these challenges and collectively devise a way for reorienting the higher education sector, for sustaining its relevance’.

The first plenary of the day was themed ‘Theorizing from the Global South and Indigenous Knowledge Production’. Among the speakers were Prof Dhruv Raina from JNU, Dr Zane Ma Rhea from Monash University, Dr Jae Park from the Education University of HongKong, and Dr Rajesh Tandon, Founder-President, PRIA & Co-Chair, UNESCO Chair in Community Based Research & Social Responsibility in Higher Education. Prof Raina shared that with globalization of social sciences and knowledge production processes, there has been a rise in inter-disciplinarity which has resulted in new models and frameworks of conversations and disciplines. Dr Ma Rhea stressed on the need to bring ‘wisdom’ back into higher education in ways which the modern professionals can be taught to be wise. She also mentioned about the ‘need to devise curriculum based on real life experiences, so that we do not end up reproducing colonial ways of thinking, teaching and learning’. Dr Park shared his thoughts on de-imperialization’, and spoke about eastern paradigms of knowledge production: Indian methods, Korean methods, Asian methods.

Dr Tandon delivered his address focused on the theme of ‘knowledge democracy’.  He mentioned that the Indian context in particular, has a rich cultural history of Nanak and Kabir and the conversations they facilitated, which articulated knowledge in different ways. He shared that, ‘western cannon’ we are schooled in, began to give premium to what is known as instrumental rationality, which is a way of knowing the world with a reason with a way to control the world with a reason’. Going back to the theme of the seminar which mentioned ‘other ways of knowing and doing’, Dr Tandon said that’ when we talk about other ways of knowing, we realize that ‘we are the others’, because knowledge has been produced, utilized, stored & disseminated through centuries in d world of practice in order to survive, grow and this knowledge of late has found validity’. He cited the example of South Africa Africa has a tradition of mother tongue scholars, who are not schooled in the western system, but are involved in framing research questions from a worldview which is not influenced or shaped by the Western Cannons. So, there was a need to focus on epistemic justice, which challenges limited conception of knowledge production. He concluded his address by sharing that ‘knowledge democracy acknowledges multiples sites of knowledge production. Universities are least popular ones in today’s context. If we want to improve the purpose of higher education and lives of people then all forms of knowledge production should be respected’. 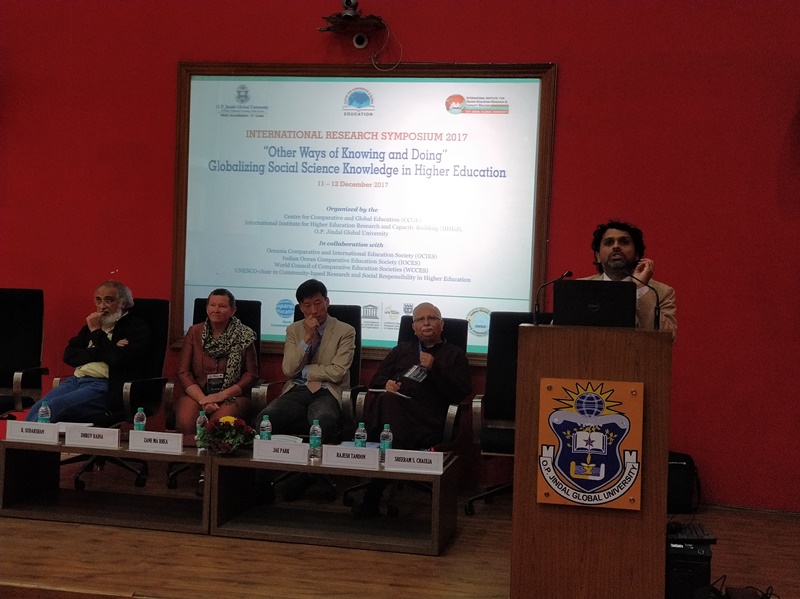 The symposium also witnessed several paper presentations across the day on different themes like alternative pedagogies, indigenous knowledge production, global governance etc. Presenting in the sessions were participants from PRIA, which is one leg of the Chair. Mr Sukrit Nagpal, senior program officer, PRIA presented his paper on ‘Utilizing indigenous knowledge for sustainable change’. In his paper, Mr Nagpal stressed on how the project on ‘Engaged Citizens and Responsive Cities’ at PRIA has been undertaking participatory methodologies to elicit indigenous knowledge and give the community a platform to voice their concerns, for interventions aimed at their development and capacity building. Further, Dr Anshuman Karol, senior program manager also presented a paper on ‘Co-creating knowledge with citizens: For making city development inclusive’. Here, Dr Karol presented the difference between centralized top-down planning and decentralized planning, bringing into account community perspectives and concerns.