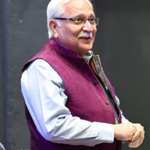 In early January, at the 107th annual Indian Science Congress held in Bengaluru, the Department of Science & Technology (DST), Government of India shared its draft policy on Scientific Social Responsibility (SSR), inviting discussion. As a leading country with a strong base of modern science and its institutions, India’s efforts to prepare a framework of social responsibility of science is really very meaningful and important.

In the draft, the purpose of the policy is described as utilisation of scientific knowledge towards achieving social goals, acknowledging that “building a strong connect between science and society is essential.” SSR is explained as “the confluence of scientific knowledge with visionary leadership and social conscience.” The ‘responsibility’ of science to connect with society is an ‘ethical obligation, not a legal requirement’ under the policy. It is viewed in the spirit of ‘giving back’ the benefits derived from science to society.

The policy explains how linkages between science and society can be bridged through a number of activities based on an annual SSR plan in each science institution of the central and state governments. Common activities include popularising science in schools and through mass communication channels for the general public. Using science for social entrepreneurship and development of applications based on science are also suggested activities under SSR.
How can this proposed framework for the social responsibility of science in India be made more robust and contemporary, building on India’s own long history of scientific tradition? What lessons can be learnt from other countries?
Globally, Europe has long-standing policies to build conversations between institutions and leaders of science with citizenry. It was at the turn of the 21st century that Europe began experimenting with new paradigms of science and knowledge. What began as a connect between science and society, shifted to science for society. To make science, especially ‘high’ science, understandable to citizens, science communication centres and networks became active across Europe, partnerships between researchers and societal problems received support from the European Union, and ‘science shops’ became a regular part of many European universities. In the past five years, the European science establishment has begun to acknowledge that society itself may be a source of knowledge relevant to addressing some of the challenges the planet faces today. Therefore, the Horizon 2020 programme of the European Union focused on science with society. This new framework is called Responsible Research & Innovation (RRI).
At the heart of the global debate today are questions about what is science and what is knowledge. India’s draft SSR policy acknowledges the nation’s long tradition of science and knowledge, but then focuses exclusively on what is labelled as ‘modern’ science. Is local knowledge about health, agriculture, water and forestry available with communities not ‘science’? With the world facing increasing impacts of climate change that affect our food supply, water availability and oxygen-for-breathing, scientists have begun to acknowledge the ‘scientific’ merit of traditional and Indigenous knowledge demonstrated in everyday practices of farmers, tribals, fisher-folks, women and others who have been innovating solutions from practice for generations. Traditional practices of organic agriculture are being promoted world-wide. Holistic approaches to health combine knowledge systems of Ayurveda, Unani, and Siddha with ‘western’ allopathic knowledge system. Yoga has become universally popular. Nutritionists acknowledge the benefits of traditional grains in diets.

Around the world, the chasm between ‘modern’ and ‘traditional’ science, as if they are in opposition to each other, is being bridged by many communities of scholars. India’s Prime Minister too has called upon all citizens to address the growing challenge of water scarcity in the country through use of ‘traditional’ knowledge for water-harvesting, storage and distribution. The Government of India needs to continue to make special investments in supporting local, Indigenous practices. The Ministry of Science and Technology, along with other ministries (Agriculture, Health, Ayush, Environment Forest and Climate Change) and multiple societal stakeholders (industry, farmers’ associations, tribals, women farmers’ groups, etc), can co-create the new SSR policy incorporating features of science with society. In this sense, the SSR framework can aspire for mutually respectful and supportive relationships between scientists and science institutions on the one hand, and society and its various actors, on the other, making them authentic partners for societal progress. This will require a more holistic and inclusive meaning of knowledge – one that acknowledges multiple sources and forms of knowledge, which when synergised with ‘modern’, published knowledge will produce resilient solutions for societal benefit. Instead of focusing on a knowledge economy, a knowledge society can be encouraged through adopting a critical, open, questioning approach — sometimes labelled ‘scientific temper’ in society — ‘liberating’ people from superstitions and dogmas.

As a recent book from Canada’s Indigenous community, Knowing Home: Braiding of Indigenous Science with Western Science, argues, “It is not about replacing one hegemonic knowledge system with another… it is about finding a way for multiple knowledge systems to work together in the interests of all life on the planet.”