In this closing plenary of this unique event, let me share some of my reflections and suggestions.

First, let me thank the co-convenors of this impressive Summit to be able to bring together an impressive array of individuals, associations and networks involved in various sectors of Canada’s international relations—business & trade, security & military, diplomacy and development. The range of speakers, break-outs and perspectives shared during these two days of the gathering of nearly 500 delegates has been very stimulating indeed. 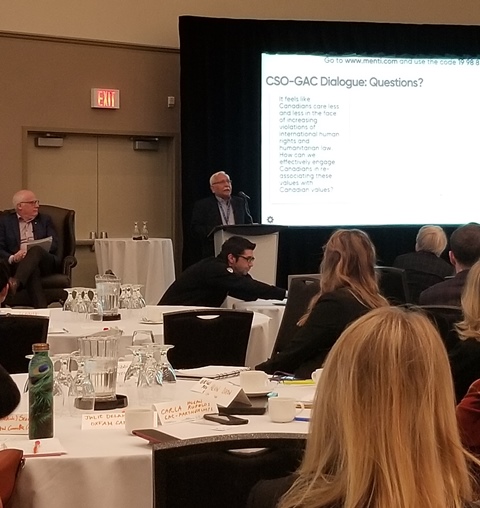 I am delighted I was able to participate in co-facilitating a break-out session on ‘Decolonising Knowledge’ along with my UNESCO Co-Chair Dr Budd Hall from University of Victoria, Canada. The engagement of researchers from CASID with practitioners from CCIC (a good model for other countries), especially the young ones, generated a lot of interesting conversation on our shared purpose of improving the lives of all citizens of the world.

I have sat here for two days reminiscing my four decades of associations with Canada, its institutions and individuals. I recall how Canadian educator Robby Kidd brought an international network of adult educators in early 1970s to incubate International Council of Adult Education, which worked with UNESCO to promote Right To Learn, International Literacy Year and Education for All.

The vision of Lewis Perinbaum in making CIDA a pioneer development agency to launch ‘partnership & innovation’ programmes in late 1970s/early 1980s, through which international networks and coalitions of NGOs with global leadership could be invited and supported as critical actors in international development, for the first time.

I recall the ‘ahead-of-the-curve’ initiative of Maurice Strong in providing leadership to UNEP (first UN agency to have Headquarters outside OECD) and galvanise civil society and business to come together with governments for 1992 Earth summit in Rio.

Ottawa became the site of a bold international treaty to Ban Landmines in mid 1990s.

But, Canadian voice and participation was less strong by late 1990s when we were launching CIVICUS (World Alliance of Citizen Participation) and dealing with the World Bank and other regional development banks to create space for participation of primary stake-holders and Forum for Capacity-building of Southern NGOs.

As several speakers have suggested since yesterday, Canada’s presence had receded over the past two decades or so. It is time to re-assert the same, but in a dramatically changed context.

One of the enduring messages for the past two days from several Canadians across the spectrum is the recognition of inter-connectedness of our present and future. The ‘Futures We’re In’ implies that domestic socio-economic development policies can not remain disconnected with Canada’s international policies and postures. Trade, business, development assistance, security and diplomacy can no longer be conducted separate from the way Canada aspires to govern and progress domestically. This is not only true for Canada, but for all the countries of the world. But the Summit echoed this consensus unequivocally, for Canadians present here.

Now, the task for participants of this Summit is to take this message to Canadians of all walks of life, all across Canada:

This may appear a humongous task, for those of us assembled here. But let me remind you that in the 1970s, 80s and 90s, Canadians were participating in local development education carried out in schools, unions, churches and communities—to sensitise them to value solidarity actions in support of Nicaragua, Philippines, Chile and South Africa. That work was impressively carried out by similarly passionate Canadians as present in this Summit.

Today, Canada needs to engage all Canadians, with tools and methods appropriate to our times, in re-shaping Canadian policies for integrating domestic and the international in a coherent whole. Such an approach would include conversations about international development, but not focus on it separately.

Throughout these two days, as well as in the vision statement, there is a recognition of Canada’s historically respected and valued ‘partnership’ approach. Its forte is in bringing multiple stake-holders and perspectives together to develop shared solutions to specific problems and challenges. It has to ‘re-invent’ the same in the context today, with potential partners at home and abroad. Canada’s domestic social capital generated through a cultural and political process of respectfully integrating its huge immigrant population—and struggling with its own indigenous communities through Truth & Reconciliation Commission—needs to be re-freshed to take on the challenges in the new global order.

Canada is home to one of the largest, and growing, immigrant population. Nearly 20% of Canadians—a full 8 million or so—were born outside Canada. They bring with them their own connections, networks and expertise—from their ‘home’ countries. I call it Canada’s ‘Diaspora’, and its social capital can be gainfully mobilised in the tasks above.

Canada’s feminist framework policy is an example of requiring re-constructing a stronger global coalition that begins to integrate similar principles in every institution and policy framework nationally, and multi-laterally. In today’s parlance, it may be labelled as ‘triangular’ cooperation, which overcomes traditional south-north boundaries.

With growing concerns for cyber security, and new technologies breaching citizen’s privacy at will, it is another area for leadership by Canada since its domestic concerns are shared by many around the world. Its domestic technology community can mobilise similar actors and networks internationally to produce alternative visions and frameworks for integrating technology with security and privacy concerns, simultaneously.

Given my long experiences with Canadian partners, including sharing a UNESCO Chair on Social Responsibility of Higher Education with my long-time Canadian colleague Dr Budd Hall at University of Victoria, I may suggest another potential global partnership that integrates intellectual activities of teaching and research domestically with global efforts. Canada’s support to establishment and nurturance of International Development Research Centre (IDRC) has enabled building of new knowledge and capacity in global south for decades. As problems and their structural causes are globally inter-connected, it may be worth considering if new global partnership to produce new knowledge and innovations to address them may well bring IDRC and Tri-Research Councils together, with shared intellectual leadership globally.

In my experience, Canadian approach internationally has supported building of local human and institutional capacity such that local challenges can best be addressed through local actors, institutions and local knowledge. There is a much greater need to re-commit to this approach when it comes to achieving SDGs and producing solutions to climate catastrophes.

I would, therefore, like to suggest that Canada focuses on SDGs 16 & 17—building institutions and partnerships— to support individuals, institutions and networks in other countries and regions to address other SDGs locally, as appropriate and feasible.

Canada can mobilise its intellectual and social capital, its partnerships and coalitions and its citizens to begin to create together solutions to our global challenges. In this way, Canada will be in Global Leadership with many others, together!

Thank you very much for giving me this opportunity to listen and share with you hope for our shared future in the world.