On 10 December 2018, 73rd Human Rights Day, ten UNESCO Chairs in India met with UNESCO team (based in New Delhi) and the UNESCO Commission in India. It was a unique first moment – these Chairs had gathered together to share their work and begin to develop as a network. 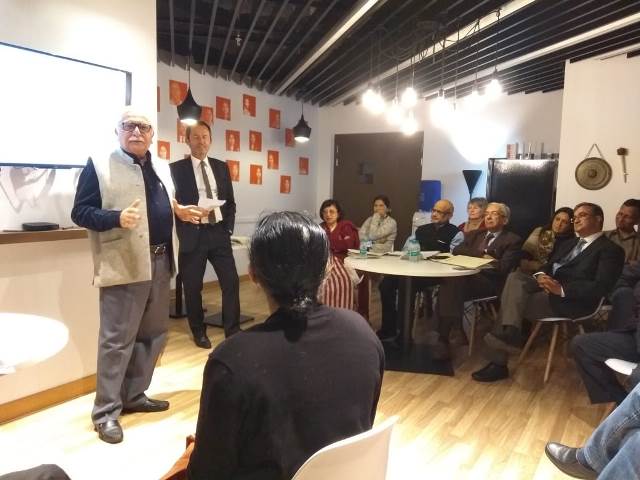 UNESCO (United Nations Educational Scientific & Cultural Organisation) was set up as an inter-governmental body in 1945 to ‘prepare minds of men and women to defend peace’. India is one of its founding members. After these 73 years, the relevance of the original mandate of UNESCO has become even more acute as it unfolds its global programmes focusing on education, sciences, culture and communication.

Over seven decades, UNESCO has pioneered several innovative ideas and initiatives. Forty years ago, realising the global imbalance and inequality in access and control over information, UNESCO championed the movement towards a ‘new international information order’. This was way before the era of the ‘digital divide’. It is the only UN agency to work towards freedom of press and protection of journalists.

In 1982, it supported the movement towards ‘Right to Learn’ which later resulted in adoption of ‘lifelong learning’ policies around the world. Learning as a fundamental human right, and the right to continue to learn throughout life, created the foundation for the contemporary emphasis on continuous learning.

UNESCO Chair is another such pioneering initiative, launched in 1992. UNITWIN/UNESCO Chair programme aims to catalyse networks of ‘bridge-builders’ from the world of academia, civil society and research institutes which  support the achievement of its mission and that of its member-states. There are 732 UNESCO Chairs in 116 countries, spanning the range of issues covered by the domains of UNESCO. India has only 10 of these Chairs.

The reflections in the meeting of India’s UNESCO Chairs generated a number of ideas about ways to engage with each other throughout the year. In addition to the domain focus of each Chair, it was felt that the bi-annual programme of UNESCO office in India (with cluster countries in South Asia) and the priorities of UNESCO Commission in India could be one basis for engagement.

Several UNESCO Chairs in India focus on peace education; UNESCO’s Category 1 institute, Mahatma Gandhi Institute for Peace & Sustainable Development in Delhi, adds another dimension to this domain of work. Several Chairs have deep interest in making their research and teaching programmes more relevant to current societal contexts of India. Informal networking amongst them can push this agenda forward.

It was heartening to learn that UNESCO has adopted a resolution to promote Mahatma Gandhi’s ideals in 2019 on the occasion of his 150th birth anniversary. Exploration of collaborative initiatives across Indian UNESCO Chairs in this context may also be stimulating for students and researchers.

As a UNITED NATIONS agency, UNESCO is unique in having visualised national commissions. There are 199 UNESCO Commissions in the world. The vision in establishing these Commissions was to enable wider societal interaction of UNESCO with various actors working in the domains of science, education and culture, keeping the larger focus of peace for all. The Commission in India is located in the Ministry of Human Resource Development since inception. In many other countries, such national commissions are independent bodies, with broader and more inclusive participation. UNESCO Chairs can also play important linkage roles with the Commission.

The Sustainable Development Goals (SDGs Agenda 2030) can be a place of encounter for UNESCO Chairs and their networks. The UNITWIN networking aspiration while creating UNESCO Chairs can be furthered through such partnerships.

SDG 17 invites all actors interested in the achievement of any SDG to learn to work together in partnership across institutions, capacities and perspectives. The meeting of India’s UNESCO Chairs on 10-11 December can demonstrate a model of such partnerships between the Chairs, UNESCO’s cluster office and India’s UNESCO Commission.

This is all the more critical because learning (and education) is a critical building block for achievement of SDGs in all countries of the world, not just the goal of quality education (SDG 4).