In a first of its kind initiative, UNESCO India and Participatory Research in Asia (PRIA) co-hosted two days meetings of all the ten UNESCO Chairs in India.  The dates for the meeting were December 10th and December 11th respectively. 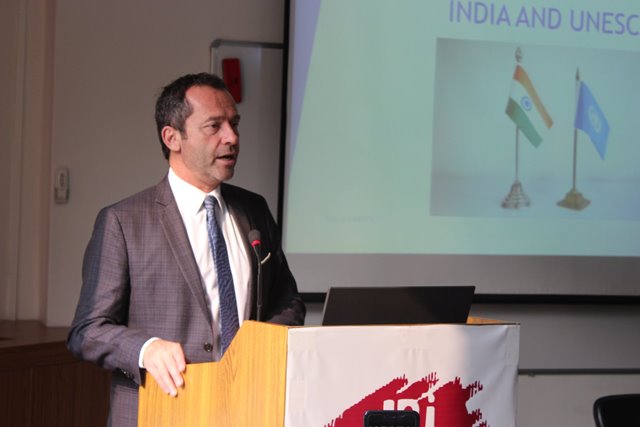 The first day hosted an informal gathering and welcome address at UNESCO cluster office in Delhi. Mr. Eric Falt, Director and UNESCO Representative to Bhutan, India, Maldives and Sri Lanka welcomed all the Chairs and gave a brief introduction about UNESCO’s work and the objective and purpose of the meeting. This was followed by a brief introduction by all the ten Chair holders. The evening then proceeded to some introductory conversations and networking. It gave an occasion to all the Chair holders to understand each other’s work in a better manner.

Second day of the meeting was hosted by and at PRIA. Dr. Rajesh Tandon, Founder President of PRIA and UNESCO Co-Chair in Community Based Research and Social Responsibility in Higher Education (CBRSR) gave the welcome address and made a brief presentation on PRIA and the work of his respective UNESCO Chair. Dr. Tandon raised some poignant questions on community knowledge and talked about co-construction of knowledge along with the communities. He thereon explained the vision and work of UNESCO Chair on CBRSR and stressed on its importance for the society and the Higher Education Institutes (HEIs) in the present times. He ended his presentations with some probing comments on social responsibilities of HEIs and Research framework.

This was followed by an address by Dr. N. Saravana Kumar, Joint Secretary, Dept. of Higher Education, MHRD, Govt. of India. Dr. Kumar was very appreciative of this initiative and stressed on the high quality of the existing UNESCO Chairs in India. However, he did stress on the need to expand more UNESCO chairs in India owing to the vast potentialities that India offers. He also made some crucial comments on sub-standard status of research in the country and pointed towards low international rankings on its accord. A proposed solution to the issue was more international collaborations and networks for better exchange of knowledge. He mentioned some ongoing government initiatives in this lead and motivated for the establishment of more UNESCO Chairs in his closing note. After this, the floor was taken by Mr. Eric Falt, who took time to explain about multifarious functions of UNESCO in India. He was assisted by his team from different departments in doing the presentation.

After these three opening address, the discussions were opened to the representatives of the UNESCO Chairs. Some of the key comments included pointers like: To create smaller inter-related networks within the bigger network of UNESCO Chairs and tap the synergies between many of the chairs; to emphasize on more people centric researches; to tap emerging contemporary areas and work on them; to consolidate the existing wide array of UNESCO Chair knowledge into one place; to evolve and use more indigenous data and knowledge with lesser reliance on the west; and finally to give emphasis to impact and scale in the work of UNESCO Chairs.

It was after these open discussions that the UNESCO Chairs were divided into two groups (interest and theme specific) and were asked to deliberate on the possibilities of more strategized networking and collaboration. After good 30 minutes deliberations, the groups convened back to present their plans and discussions. The prominent points of emergence included:

In a quick response to the aforementioned suggestions, Mr. Eric on behalf of UNESCO India assured more visibility to the UNESCO Chairs on the official website. He was also supportive of regular meetings such as the one that happened and invited interested Chair holders to send in proposals to host the meeting in the next cycle. He also stressed on the emergence on the theme around principles of Mahatma Gandhi for the coming year and encouraged the Chairs to do something on similar themes under their Chair activities. He also clarified some of the internal governance mechanisms and pointed out to the non-practical implementation of some of the above suggestions. 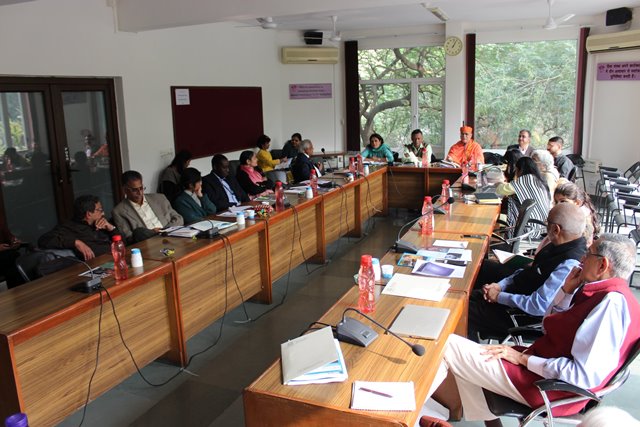 With some closing remarks from selective Chair holders and a word of thanks from Dr. Tandon, the meeting came to a close with an assurance of carrying forward this wonderful initiative much regularly and devotedly in the coming phases.