Dr. Ana Persic also added to the dialogue by highlighting the need for awareness raising on open science, open science financing, and a strong monitoring framework for the recommendation. Among the activities planned as part of the implementation agenda are developing a series of supporting tools such as technical briefs, mapping existing open science policies, collecting best practices, analysing finance mechanisms, building capacity and developing an open science monitoring framework. There will be a DG’s OS steering committee for implementation of the recommendation. In addition, a global open science partnership was created in 2020 to provide inputs in the process of development of the recommendation. Five Open Science Working Groups will also be created with a calendar as given in the below picture: 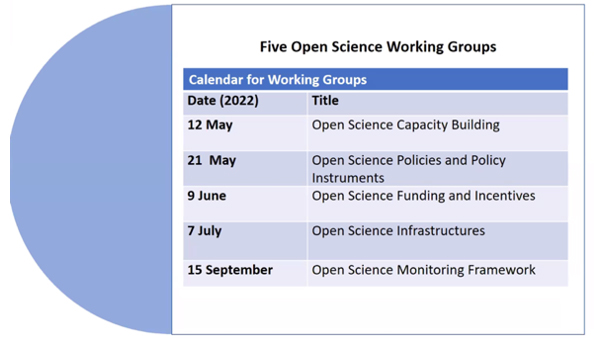 Finally to take stock of the progress, in December 2022, the World Science Forum will take place in South Africa.