‘Even the walls are white’ observed Leonard Harris, a black man navigating the ‘labyrinth’ of the American university system. Here he noted the privileged position that his colleagues and their students enjoyed in an established hierarchy of knowledge, merely because of their skin colour.  His insight thirty four years ago still rings true today and inspired the sub-title of our new book. 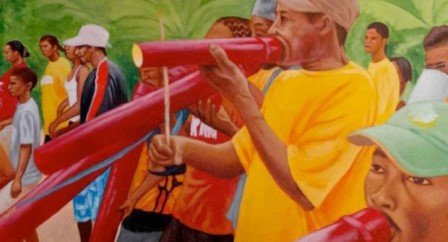 People’s Knowledge: Escaping the White-walled Labyrinth is the story of research participation and engagement, written and edited for the most part by those on the receiving end.  Attempting to reflect on the variety of backgrounds of those oppressed by becoming ‘engaged’, we commissioned first-hand accounts from thirty-eight grassroots-based researchers who are mostly people of color, but also include women from white working-class backgrounds, as well as a funder and two white middle class male academics.

Ten years after the launch of a major university-based Beacons for Public Engagement initiative across the UK to address the gap between the ivory towers and the rest of us, academic websites and hard-drives are groaning with reports of engagement initiatives, innovations and impacts. Yet these accounts often contain little that critically reflects the immense challenges of building long-term relationships between professionally-trained researchers, whose attempts at collaboration are normally highly constrained by their institution’s bottom-line, and those outside their white walls.

Already suffering from cutbacks in state funding in their local area, community members can feel they have been subject to ‘drive-thu participation’, in which the researcher stays in their chosen local community just long enough for their engagement box to be ticked.

In Learning at the University of Armageddon, our opening chapter, a range of anonymous contributors reflect on this issue.  One contributor recalls the humiliating experience of young people of refugee background when they applied to speak at an Oxford conference about supporting refugees. The academic organisers demanded Home Office documentation of refugee status before they would waive the registration fee of our authors.  In another contribution, a funder explains how they decide whether a community group’s involvement in a research proposal is genuine or superficial.

One of the most powerful lessons from half a century of the practice of participatory action research and similar approaches around the world is also presented in the book: we should question traditional divisions between professional academics and community-based researchers as ‘us’ and ‘them’. Successful long-term collaborations can only build when we openly debate our values and goals, building on a basis of our shared humanity.

Of the five people in our editorial collective, only one has undergone formal postgraduate training or led an academically funded research project. The lead authors of all except one chapter are from the world outside academia. Although most of us are not professionally trained, we believe that our lived experience gives us a perspective that is a useful complement to that of academic professionals. However well-intentioned, such ‘experts’ often lack a depth and/or breadth of knowledge of that which they study.

Maori scholar-activist Linda Tuhiwai Smith points out that many people whose ancestors have been colonized or enslaved have a negative attitude to the word ‘research’. For them ‘the word itself is probably one of the dirtiest words in the indigenous world’s vocabulary’, she writes; ‘it is implicated in the worst excesses of colonialism’. For many people who are descended from those who were exploited by what they saw as a scientific rationale for running an immoral system, the research system itself is tainted.

We see inquiry as an innate human quality. All humans are therefore potential researchers. Approaches such as participatory action research put people from the non-dominant groups in society, like many of the authors in this book, at the center of the research process, which is essential to overcome injustice.

No longer the subject of research, we become researchers on things that concern us and on which we have gained expertise through our experience. Participatory action research recognizes that we are all able to utilize a range of methodologies to investigate, analyze, reflect on, and come to terms with new knowledge. And these processes of inquiry have the potential to help us overcome the forces that oppress us.

To be launched by the People’s Knowledge collective at Coventry University’s Centre for Agroecology, Water and Resilience on 4 April, the book includes contributions created by a women’s circle, an expert patient, an Haitian artist, peasant and working class communities.

We developed our ideas together in a series of workshops over several years. We invited a handful of more privileged researchers, who have received formal research training (and who regularly receive recognition in the form of funding and publishing of their analyses), to join us. Aiming to explore how we might work together better in the future, we shared our differently situated perspectives. We concluded that, to achieve our objective, we must first document and provide a road map of what is going wrong in the way research is done at present.

The financial support for our initial meetings came about with the UK’s research funding councils attempting to support what has variously been called ‘participatory research’, ‘community engagement’, ‘citizen science’, ‘action research’, and the ‘co-production’ of knowledge.

These terms are used with increasing frequency in academic and policy circles. However, first-hand testimonies by those who have taken part in such processes are extremely difficult to find. This publication is an attempt to contribute towards filling this gap.

The concepts of engagement and participation have risen to prominence at a time when the training and daily lives of professional researchers rarely includes spaces in which they (and for one of us this should say ‘I’) can think morally, historically, or philosophically.

Our final chapter includes a letter written by a white male middle-aged, middle-class academic reflecting on how researchers who are in a position of relative privilege might learn from his past mistakes to help the next generation avoid them.

People’s Knowledge and Participatory Action Research: Escaping the White-walled Labyrinth is available as a free ebook or from Practical Action Publishing, price £15.15. Several of the book’s authors and editors will be contributing to a training course, Power Relations and Participatory Research (16-18 May 2017, London, UK).